The European Championship is finally here – and everyone knows that cheering on your team is twice as much fun with good company. Why not sweeten up the snack situation at your soccer party with some delicious soccer cupcakes? Our colleague Verena has decided to share her prized recipe for her unique soccer snack! 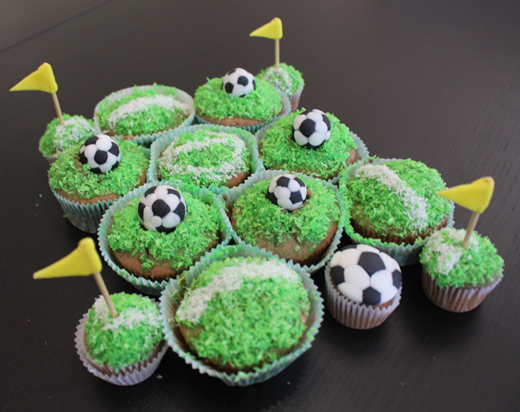 For the cupcakes themselves, you’ll need the following ingredients:

For the decorations, you’ll need:

Of course, before you can get busy decorating, you’ll need the cupcakes. If you don’t have a cupcake tray, a larger one for muffins will also do.

Let’s get baking! Preheat the oven to 180°C (350°F) and then start out by beating the butter, sugar and vanilla sugar until the mixture is frothy. Then add the eggs. And after that, mix in a part of the flour with the baking power. Stir in flour and milk alternatingly until your dough isn’t too runny and feels light and fluffy.

Grease your cupcake pan (or use cupcake liners) and fill in each cup until it’s about 3/4 full. Stick your tray into the oven and bake it at 180°C for about 10 minutes.

Let the cupcakes cool off while you prepare the decorations!

If you want to go all out and prepare a whole soccer field, you’ve got a bit of work ahead of you. It’s easiest to start off with the soccer balls, so they aren’t discolored by all the dye later on. Make sure to keep your hands scrubbed clean when working with the fondant so the white bits stay nice and white.

For the soccer balls, it’s easiest to start off by making lots and lots of tiny and white balls (since soccer balls are predominantly white, you’ll want a lot more of those), and several larger white balls as the basis of your soccer ball.

Take a large ball and moisten it slightly to help things stick (but not too much, or it will achieve the complete opposite!). Arrange the smaller balls on it to form the classic pattern – it’s easiest if you start off with one small black ball surrounded by 5 white balls, then adding 5 black balls in the gaps left by those, and filling the resulting gaps with white balls again. Once your larger ball is completely covered, you can carefully roll the ball in your hands (with just a little bit of pressure) to get that soccer ball look!

Next, it’s time for the field:

Next, mix the powdered sugar with some warm water until you have a nice, thick sugar icing. If you don’t want it to just be sweet, you can also add a few drops of lemon juice for flavor. Add a couple of drops of green food coloring to get your icing to the desired hue.

Last but not least, you can prepare the corner flags: Flatten the yellow fondant and cut out little squares. Fold two opposing corners together (with a toothpick in the middle), to get the classic triangular flag shape.

Once you have everything ready and the cupcakes are all cooled off, you can spread the sugar icing over the cupcakes and dip them into the green coconut flakes. It’s best to cute a little hole into the icing for the soccer balls, so that they don’t just roll away.

Now you can stick in corner flags and use the leftover white coconut flakes to draw various lines and circles.

If you’re pressed for time, you can also just make simple flat fondant covers with a soccer ball pattern.

As before, simply form lots of smaller balls out of the black and white fondant -again, more white than black. Dust your workspace with some powdered sugar, and arrange the black and white balls into a rough soccer ball pattern. Keep in mind it should end up being roughly large enough to cover a cupcake later when flattened.

Gently press down the balls until they’re reasonably flat, and cut out a circle with the rim of a glass roughly the size of your cupcakes.

Put the finished soccer balls circles on your cupcakes and carefully push them down to make them stick (if needed, you can also stir up some white sugar icing to help them stick).