When the breeding completes, you’ll be notified by a pop-up. Your animals can have anywhere between 0 and 6 babies! Your puppies, kittens or other babies will appear in your card bar and you’ll be able to place them in pens, just like you would an adult animal. Of course, you can also rotate them to make them fit by using the light blue arrow that appears on the card.

After a breeding ends, the slot in the Nursery will be occupied for some time, since the box needs to be cleaned. This happens automatically though, so you don’t need to worry about a thing! Your adult animals will likewise need a rest – after all, having babies can be quite exhausting. You can skip the wait for Diamonds if you’re in a hurry though.

Note: Be careful that you don’t accidentally sell one of your breeding animals to a customer – you won’t be able to breed anymore and will have to buy a replacement in the shop.

Tip: Try to lock one adult male and one adult female of each breed in a single pen – that will prevent them from being sold to customers. You can find the option to lock an animal in the bttom

right corner of the ring menu. If you click the lock, it will turn red and the animal can’t be sold anymore. You can unlock it anytime by clicking on the lock again.

I only have two adult females, what now? 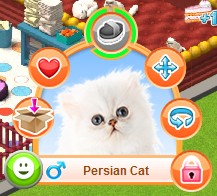 If you buy two dogs or cats in the shop and place them in a pen one after the other, one animal will automatically become a female, and the other a male.

However, if you raise several young animals and sell animals to customers, it could be that you wind up with several animals of the same gender (you can check the gender in the ring menu – it’s in front of the breed name).

No need to panic though! You can change the gender by returning your animals to the inventory. To do that, click on the little icon with the box in the respective animal’s ring menu (Remove Animal). Your card will be returned to your card bar on the bottom edge of the screen.

Now put both animals in a single pen, and one will be a male and the other a female. Now you can breed the animals just like you usually would.

Note: Customers don’t care about the gender of the animals they buy. The only thing that matters are the breed and whether the animals are young or fully grown. The gender is only important for breeding.

Tip: Build enough pens and keep a second breeding pair of each species so that you can fulfill customer requests faster,